I’m new to Indico…there is a lot of great stuff here, and we have decided to make use of it for the Linux Plumbers Conference this year. One thing that sticks out, though, is that the system has not been designed for small-screen use. We may be able to find some resources to push things in that direction, but it seems surprising to me that nobody else appears to be working on this. Is there a responsive-site effort out there that I’m unaware of that we could perhaps join into?

We are aware that mobile-friendliness is not Indico’s strongest point and we’d really like to change that. We first experimented with the idea of a separate mobile website back in 2012 and the result was far from perfect (the technology was not mature enough and we aimed for something too general that missed important functionality). Since then, our stance is that there are two different possible paths to a quality mobile experience that are not necessarily mutually exclusive:

I don’t know which option sounds most appealing to you, but there is already some work done here at CERN on mobile apps that integrate with Indico’s API. We could probably open source it, if you’d like to go that way.
I personally think that option 2 is the one that would be the easiest to achieve in the short term.

I think both options have there pros and cons. Much of it depends on which part in a conference life cycle should be used mobile.

But then the current Indico would still work fine for that. So, that actually makes 2 more interesting in terms of added value, right?

Well, the pages are ahrd to read on mobile devices, so there is value as well. 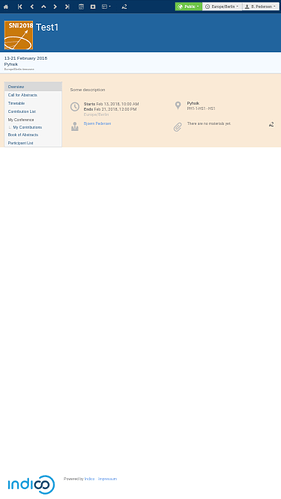 The image shows ~ how a page looks on a smartphone, so readbility is not too good without first zooming in.

Sure, I agree. What I meant is that since in point 1 users will mostly be using a desktop browser, the percentage of users who will benefit from a change there will be much smaller than on 2.

Thanks for the reply. Just to follow up, we are playing with the CSS and the templates a bit to see what can be done. The event front page isn’t too hard to make more friendly. The timetable pages are … harder. Once we’ve figured out what we can do I’ll see if any of it is suitable to push back upstream for your consideration.

So is there any solutions for indico to be visited on mobile more friendly now?

Not currently. Ideas and contributions are welcome.

FWIW, the curious can see some of the work we did on the Linux Plumbers Conference site. Not perfect, but it did make the site a lot more workable for mobile users.

I would love to find a way to upstream some of this work. It was done with a hatchet and isn't in any way suitable for more general use now. If there were an Indico-capable developer who wanted to work on some of this stuff, I think that funding could be found to cover it.

Thanks for sharing, that looks indeed much better. It would be indeed great to find someone wiling to contribute that to upstream. The fact that there might be funding should be an incentive…