I’m currently migrating an indico 1.2 install to 2.1 via 2.0 and during testing we discovered that the event protection permissions table shows local groups by numeric ID rather than name. At first I thought this might be a migration issue, but I can reproduce the behaviour on a fresh install of 2.1.5 without any imported data.

It doesn’t appear to affect the usage of the group permissions, and the group name does seem to be present in the escaped form field that is used to populate the ACL control. 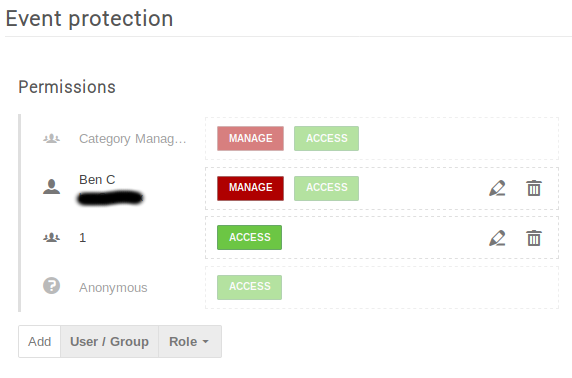 Issue: Show name instead of ID when adding local group to ACL

Any chance of reviving this? It’s still an issue, and I don’t see any updates since opening the bug report.

Turned out to be a one-line fix. We’ll include it in a 2.2 patch release since we want to do one for the event labels feature anyway.

This is now fixed in the 2.2-maintenance branch (including some improved UI in for remote groups where the source wasn’t displayed); we’ll release 2.2.7 containing this fix soon (likely today or monday).